Rather than being an upgrade from ver. 5, version 6.0 of SQList is all but a complete rewrite.
Upgrading to version 6 is not a straightforward upgrade, but rather a new installation, and the licences and replication profiles are not compatible. In fact, version 5 and 6 can even coexist on the same machine, provided they are not configured to export to the same SQL database as that would cause conflicts.
As a first step we recommend that you become familiar with the new version by downloading and installing a 30 day fully working trial of version 6 from our website at:
http://www.axioworks.com/sqlist/try-sqlist/
This is a fully working trial, so you can try all your replications on a test database and see the differences with version 5. You will notice that the structure of the SQL tables is not identical to version 5, e.g. the naming of tables an columns now use "_" rather than ":" and ".", and the types of column use more appropriate SQL types like datetime2, date, and bigint.
Warning: There are several breaking changes in this release, especially if you are using special features of SQList like custom column configurations, bespoke application settings, or customised licences.
Also, the Keep deleted item feature has been deprecated.
If you are planning to upgrade from a previous version, please contact us at support@axioworks.com and we will assist you directly on a case-by -case basis.
See below a summary of the changes.

So, we have all but rewritten SQList! Wondering why?
The reason is simple: the previous version, although very robust and reliable, had reached some crucial limitations that could not be solved by simply adding more code to it. For example:
Of course, we kept all the things that makes SQList the great product it is, like:

We have written a brand new UI for SQList Manager, this is what it looks like: 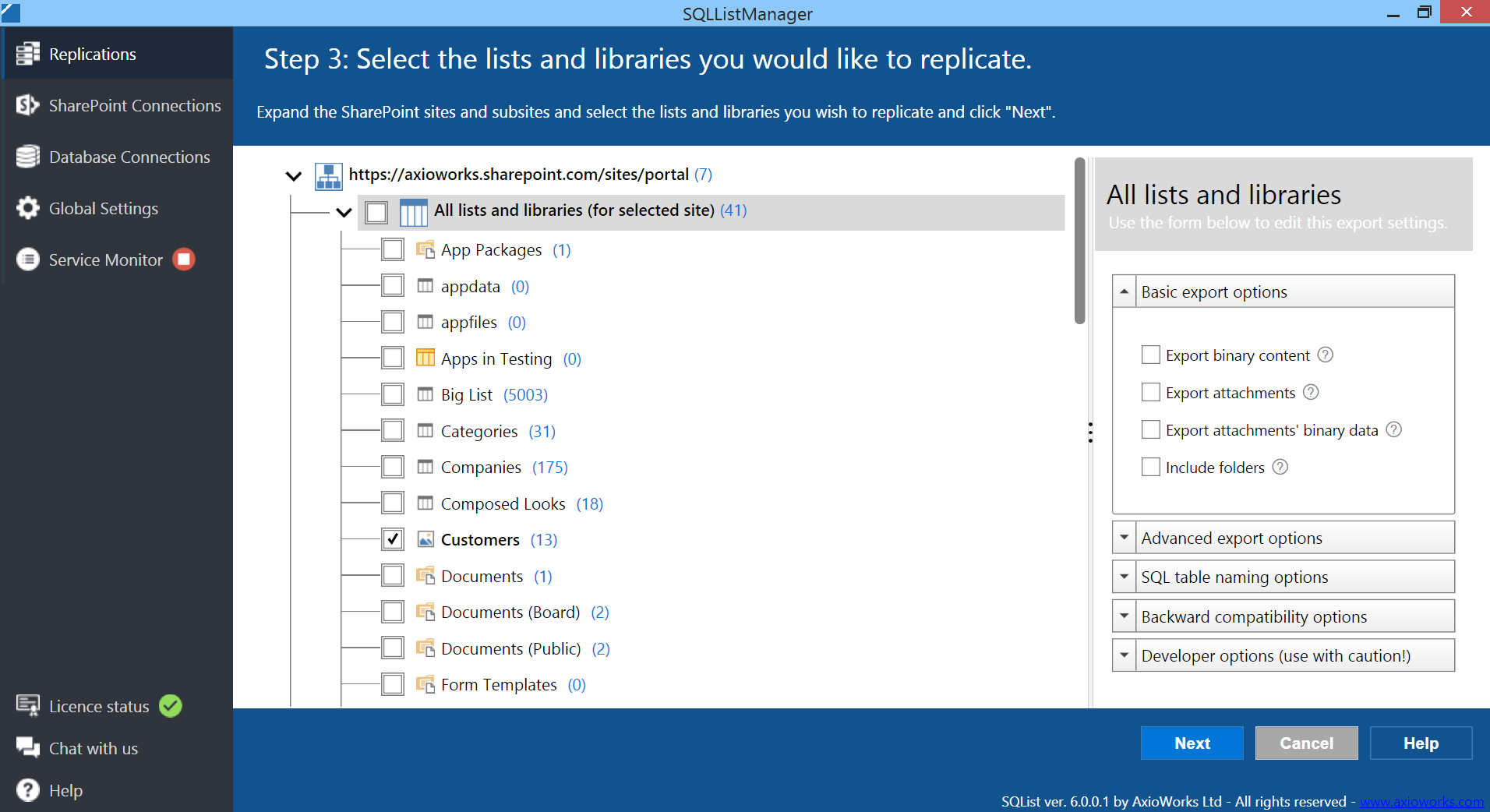 We hope we have made SQList Manager more intuitive than the the previous version (the feedback from our beta-testers was very positive), but that is not the only reason we rewrote it.
The previous UI was not built to take on many new features that we want to add to SQList, so we have made this new one that will allow us to do just that. One example is already there: you can now configure replication settings not only at global level, but also at replication and even list level.
As for any aspects of SQList, if you have any feedback please do contact us at support@axioworks.com.

SQList change detection was already very good. It did not require any changes to your SharePoint environment, it took very little resources, was 100% fault tolerant, and never missed a change.
The new engine still has all those qualities, but with the difference that it does all that with just couple of calls to the SharePoint server rather than hundreds or thousands. Even if you are replicating hundreds or thousands of lists!

We reduced the time it takes SQList to make changes to the SQL tables once a change is detected. In our tests we registered times up to 70 times faster! That says it all really.

The previous version of SQList was not very strong when it came to SharePoint authentication, the main reason being that authenticating against SharePoint Online and On-Prem is becoming more and more complex by the day.
So, rather that trying to solve all those problems ourselves, we left it to the experts and implemented the well renowned SharePoint PnP AuthenticationManager library.
You can read more about this library here.

While SQList always supported non-Latin data, it did non handle well list and column names that used non-Latin characters; that was because special characters are encoded internally by SharePoint, so the resulting column name was just a string of hexadecimal codes.
We have added a setting that allows you to use the display name of the list and column, so that they the resulting SQL table and column are just right.

You can now configure different replication settings for different replications or even individual lists. Do you need to use a different SQL name format for a particular list, or exclude some specific fields for another? No longer a problem, you can do that and this is what it looks like:

This new version generates a better structure in the SQL database. For example, it uses underscores in the names of SQL tables and columns and it uses the newer SQL column types where applicable (datetime2, date, etc.).
However, if you already have SQList running and need to keep the structure of the SQL tables and columns the same, we have added some specific settings that can be used to keep compatibility with previous versions (as much as practically possible...). 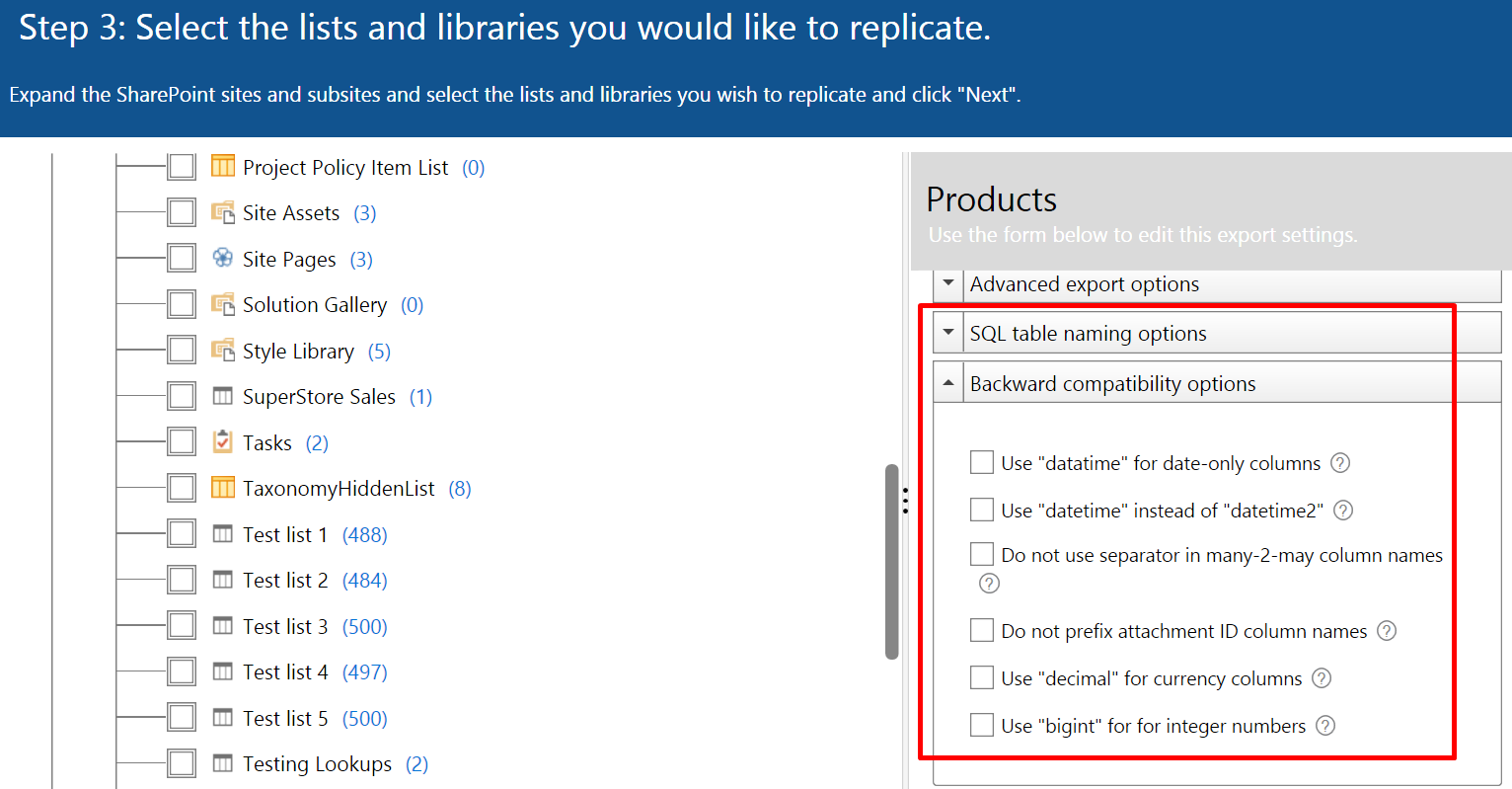